How do I expose a .netstandard2.0 library with COM for use in VB6?

I have a dotnet core library, a framework 4.7.2 library and a vb6 application.

I want to write a common library for them all to access and so choose .netstandard2.0

I tried a the 4.7.2 framework wrapper library between .netstandard2.0 library and vb6.

However I ran into assembly binding problems

Looking at the docs I see

In .NET Core, the process for exposing your .NET objects to COM has been significantly streamlined in comparison to .NET Framework.

However no mention .netstandard2.0

I decided to try following the docs anyway even though my project is using .netstandard2.0

I decided to try making a .net core wrapper library and enabling it for com.

I was able to add my .netstandard to the wrapper library via a nuget package (I build the .netstandard library using azure devops)

When I build my wrapper library the .dll, .deps.json, .pdb, .runtimeconfig.dev.json and .runtimeconfig.json files are created in a bin\Debug\netcoreapp3.1 folder.

However none of the .netstandard library files appear in the bin\debug folder.

I copied the .netstandard library and the .netcore wrapper libraries to the same folder and ran

However no .tlb file is created which I need to be able to use from VB6

I note the following in the docs

Unlike in .NET Framework, there is no support in .NET Core for generating a COM Type Library (TLB) from a .NET Core assembly. The guidance is to either manually write an IDL file or a C/C++ header for the native declarations of the COM interfaces.

I found some information on github but would love a step by step guide to making the .tlb

I thought about using latebinding instead but am unsure of how to use it with a com library.

I put a sample project on GitHub including some VB6 files. With VB6 referencing the .tlb referenced with the framework library.

When I try to run that I get

So I copied all the files from my framework test project to my vb6 folder, rebuilt and ran.

Then I got the error

I see the file Microsoft.Extensions.DependencyInjection.dll is present with File version 3.100.220.6706

The issue is due to assembly binding resolution that fails when ran from VB6 (IDE or compiled .exe file).

Here are the steps to solve it: 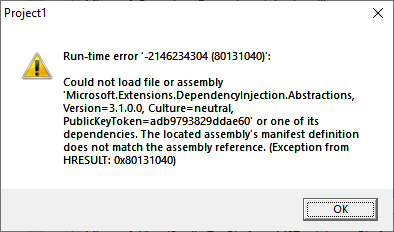 The error is clearly a mismatch between the version of your assemblies aside the Project1.exe file and the version of referenced assemblies (not references you've created yourself but reference embedded in these assemblies... ). You don't see that when you start a .NET program because resolution is a very complex process that depends on a lot of parameters (and it's not getting any better with .NET Core, Framework, Standard, nugets, etc.).

To futher check it's a mismatch error, you can also use the Fuslogvw.exe (Assembly Binding Log Viewer) tool from the SDK.

Now we know it's an assembly version mismatch issue, what you can do is create a file named Project1.exe.config aside Project1.exe and add assembly binding redirects to it.

The easiest way to configure it is to redirect all possible versions to the ones present in the directory that contains your program, so in your case (and as of today, as all these can evolve...), it would be something like this, possibly for every assembly you reference directly or indirectly:

Unfortunately, there are many satellite assemblies, and it's a bit tedious to create all redirects with correct information, so I've created a tool that creates a .config file with the redirects configured automatically for all .NET assemblies in a given directory: https://github.com/smourier/BindingRedirectGenerator.

If you want it to work for the VB6 IDE too, you'll have to use the same procedure in a VB6.exe.config file aside VB6.exe.

Regarding the .NET standard, I may be wrong but I think this is not applicable here because the COM interop stuff are at a higher level than the one .NET standard is targeting; we can only talk about either .NET Core or .NET Framework for COM interop.

If you want to generate a type library, you have few options.

By far, the easiest method is just to use .NET Framework. The fact that you are wanting to create a type library negates the advantages of .NET Core already because several COM, especially the "Automation" features are Windows-only. Using framework will be fine at least until .NET Core 5 comes out.

That said, if you have a business reason for using .NET Core but still need COM support, including the type library, then based on this GitHub comment, you should be able to compile your own IDL. Note that requires you to install C++ build tools because the MIDL compiler is not really a standalone thing that you can get without the rest of the C++ build tools.

It is strongly suggested to have had read the documentation on how .NET Core handles COM activation.

Assuming having the C++ build tools is not a barrier for you, the steps would be the following:

Would be translated into IDL:

Once you've defined the .idl file and it is an accurate representation, you can then use MIDL to compile the .idl file into a .tlb file. Usually something like midl foo.idl /tlb: foo.tlb. You should make use of the MIDL language reference to help you write the .idl file. As a quick way to get started, you could copy your C# interfaces to a .NET framework project, use tlbexp, then use oleview (available via Visual Studio Developer Command Prompt) or olewoo to view the resulting IDL file to get you started.

The next step is to then create registry keys so that your CLSID can reference the type library. You will need to have your assembly's GUID handy and it must be used as the library's uuid in the .idl file as well.

Using IFoo interface example, you would need to create the registry similar to below (using .reg format for easy sharing/comprehension and assuming per-user installation, rather than per-machine):

You will also need to create the registry in the CLSID, Interface, TypeLib, and Record as needed. This article provides a good overview of all registry keys but keep in mind it's assuming .NET framework, not .NET Core, so not all keys are applicable, especially under the CLSID branch.

Note that when you run the regsvr32, it will normally create the keys in the CLSID and Interface branches but you will need to add the TypeLib keys under the Interface's branch and also an entry to the TypeLib branch. You also will need to create the ProgId keys, too if you want to support CreateObject functionality.

Initially, you can start with just a .reg file that you can manually update & maintain but if you have several objects, then it becomes desirable to automate this. This can be also managed via the DllRegisterServer call so that when you execute regsvr32, it will take care of registering the keys. On the other hand, you're now polluting your codebase with registration code. Some elect to use installers to do the registry keys write instead.

I hope that helps you get started!

We spend thousands of hours creating application using EF6, and the structure we followed used EF6 framework into a separate class library layer, we are trying to switch to MVC 6 but still want to use EF6 class library project....The problem we are currently facing is the connection string, we tried adding the connection string in ...applicationset...
asp.net-core-mvc c# connection-string entity-framework entity-framework-6
asked by Azhar

Package X is not compatible with netstandard2.0

Assume I have an EF entity class Person, with a PhoneNumber on it. PhoneNumber is stored as a string type, but I want all accesses on the Person to go through Phone which has some nice accessor functions, e.g. validation or ...GetAreaCode().... I want to back it in the db as a string, but when queried for it I want to return it as a PhoneNumber:..
c# entity-framework-core
asked by bit0001

This seem to be ...an issue that have been fixed already..., at least for the SQLite databases....My solution consists of 3 projects:...WPF project (default startup project) (....NET Framework 4.7...),..."Core" project holding the view model and non-UI stuff - Class library project (....NET Standard 2.0...)..."Relational" project holding all of the...
.net-core c# entity-framework entity-framework-core visual-studio-2017
asked by Lucas

Using Identity DbContext and DbContext in a class library in ASP.NET Core

I have a .NET Core 2.0 solution which contains a class library project and an ASP.NET MVC project. The MVC project reference the class library. Class library has all the entity classes and DbContext using EF Core. Everything was fine up to that....Then I added ASP.NET Identity to the MVC project. It creates a separate IdentityDbContext to create th...
asp.net-core asp.net-identity entity-framework-core
asked by Deepan Cool

TableAttribute is missing when change target from netcoreapp3.0 to netstandard2.1

I am attempting to run ...update-database... to migrate some changes that I made to my db....It all goes well until I get the following error:...No suitable constructor found for entity type 'ReportType'. The following constructors had parameters that could not be bound to properties of the entity type: cannot bind 'id', 'name' in 'ReportType...
asp.net-core c# ef-migrations entity-framework entity-framework-core
asked by evantw