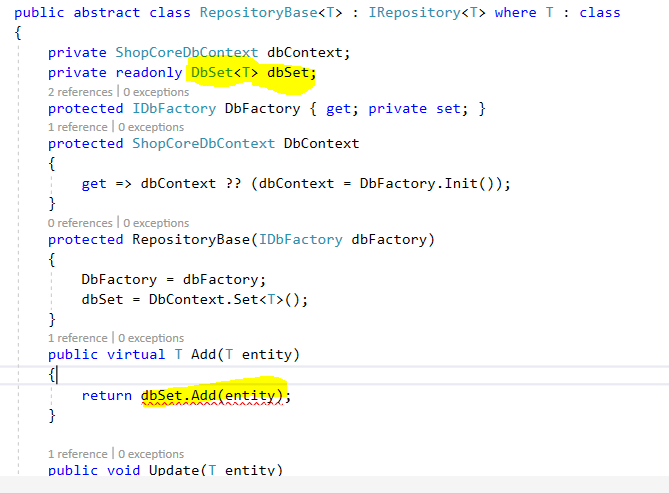 With IDbSet nothing happen. But IDbSet interface no longer exists in entity core. This is error detail:

It requires it must be an interface.
So what should I do now?

To solve your immediate problem:

The Add method doesn't return the entity directly, but a wrapper entity. Use its .Entity property to get back the value (or return the passed in value):

According to this GitHub issue there is no plan to bring it back since DbSet<T> is now an abstract base class that can be used to mock for testing or subclassed:

The issue with interfaces is we either exclude new members or break folks who implement the interface. The base class is also slightly better for folks writing their own test doubles (rather than using a mocking framework) since you only need to implement the methods you actually use.

Closing as we have been using the base type approach in EF6.x for a few releases now and have not heard any feedback on real scenarios where this doesn't work as well.

Why there's no AddRange/RemoveRange method in IDbSet interface in Entity 6?

In Entity Framework 6 AddRange method has been introduced. It's great for big inserts because DbSet.Add method always trigger DetectChanges which extremely slows down the process. I've just wanted to use some existing code based on IDbSet interface when realized that it doesn't have AddRange method. It exists only in DbSet class....I googled a litt...
c# entity-framework entity-framework-6
asked by Landeeyo

I have encountered an issue when inserting (...Add... method of EF API) or updating (...Update... method of EF API) entities holding reference properties to existing entities (I call existing entity an entity that already exists in the database, and has its PK properly set)....The model consists in ...Place..., ...Person..., ...Address..., and ...S...
c# entity-framework-core
asked by kall2sollies

I was playing around with Entity Framework 6 on my home computer and decided to try out inserting a fairly large amount of rows, around 430k. ...My first try looked like this, yes I know it can be better but it was for research anyway:...var watch = System.Diagnostics.Stopwatch.StartNew(); foreach (var event in group) { db.Events.Add(event); ...
c# entity-framework entity-framework-6
asked by Ogglas

I am having trouble creating DB in SQL Server Express with Entity Framework Core 2.0

I am going through the MvcMusicStore tutorial on the www.asp.net website....I am able to use Entity Framework Core 2.0 and migrations to create a DB in localDb. Here is the connection string from that in appsettings.json:..."MvcMovieContext": "Server=(localdb)\\mssqllocaldb;Database=MvcMovieContext-19840e0a-5fb4-409c-9f38-7f2946cd3937;Trusted_Conne...
entity-framework-core sql-server-express
asked by Sam

I've been searching a bit on this but thus far haven't been able to find a decent solution. I'm trying to get an entity from my database without the related entities attached to it....The function goes as following ...return context.Entity.SingleOrDefault(n => n.Name == name)... where ...context is a DbContext.......As of now the reply contains onl...
c# dbcontext entity-framework-core
asked by Haraldur

I am trying to use "table per hierarchy" to model a variety of account types in my database using EF Core (2.1) and I am having a problem where I am getting additional foreign key columns added for the derived types. I have seen ...this... question/answer but I don't think it is the same as my situation....Here are my account classes:...public abst...
c# entity-framework entity-framework-core
asked by Ben

I understand that the serializer in ASP.NET Core may not be able to handle certain responses, but why do I get this error when I don't try to return the object in question?...See the error here: ...https://imgur.com/a/2se9eWB...When I try to affiliated my ...ProjectResourceRequest... with my ...ProjectResourceAssignment..., it writes to the databas...
asp.net-core asp.net-web-api c# entity-framework-core
asked by Tom Crosman

I have a problem with my code. The problem is I am not getting post data by parameter using ajax....Can anyone fix this? The code is shown below....This is Javascript Ajax code where I am sending data by post method to the controller:...$('#pending').click(function () { SaveTestResult("/Reception/PatientTests/SavePendingTest"); }); function Sa...
asp.net asp.net-core asp.net-core-2.0 asp.net-core-mvc entity-framework-core
asked by SK jha