At the point of creating a new MVC Controller: 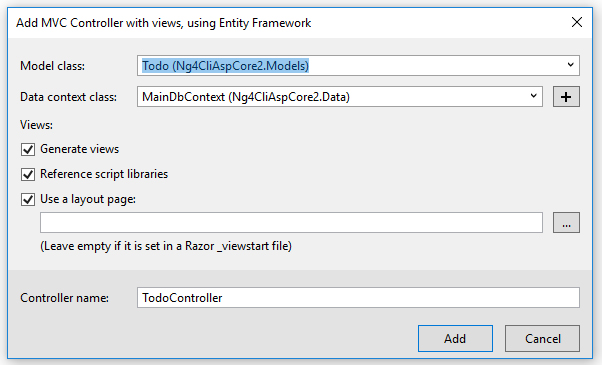 after I click Add button, I get the following Error:

Here is my simple Context class:

and my simple model:

I have made some search on this issue, most of the posts point to a dropdown list or a SelectList method using MVC, but for my case it is a Controller creation fail, so it seems to be an Entity Framework Core issue

Thanks to @poke comment above, and to this link: "Use Code First with connection by convention", by modifying the context class as follows C# will call base class parameterless constructor by default

It's a tooling error. Most likely, you're running Visual Studio 2015, which doesn't have full .NET Core support. Basically, in previous versions of EF, DbContext had a parameterless constructor, and this version of the scaffold generator is depending on that. In EF Core, DbContext does not have a parameterless constructor, so the generator is choking on that.

If you're using VS2015, upgrade to 2017. It's time. Aside from that, you don't need this anyways, and it's only leading you down a bad path. All the scaffold does is create a new class under Controller, named {Name}Controller that inherits from Controller. Then it creates a folder named {Name} in Views and adds some basic HTML for doing CRUD. You'll end up replacing most of this HTML anyways. Additionally, the scaffold requires you to work with an actual entity class, which is the last thing you should ever be doing. You should always accept user input via a view model and then map that posted data onto your entity class before finally saving the entity. Look at the scaffold being broken as an excellent opportunity to start learning how to create good code.

I am getting this error when migrating in EF 7...Microsoft.Data.Entity.Metadata.ModelItemNotFoundException: The entity type 'object' requires a key to be defined....I am not sure what I am doing wrong. This is the dependencies I am using on project.json..."EntityFramework.SqlServer": "7.0.0-beta5",..."EntityFramework.Commands": "7.0.0-beta5"
entity-framework entity-framework-core
asked by paburgos

No parameterless constructor was found on 'TContext'

I am not really clear on why the error happens. When I first scaffold my project the migration and update-database commands ran fine but after few changes in the application I was getting ...this error.... The only solution floating around is ...this...:...public class BloggingContextFactory : IDbContextFactory<BloggingContext> { public Bloggin...
.net-core asp.net-core asp.net-core-mvc c# entity-framework-core
asked by lbrahim

I am working with the latest .Net Core and EF Core in Visual Studio 2017. I have created a model and it was working great. I have since made some modifications and am getting the following error when I try to add a new migration:...Build succeeded. 0 Warning(s) 0 Error(s) Time Elapsed 00:00:09.08 System.MissingMethodException: No parameterle...
asp.net-core c# entity-framework entity-framework-core
asked by Grandizer

No parameterless constructor found after migrating to 2.0.0-preview

After migrating my project from EF Core/Asp.NET Core 1.1.2 to 2.0.0-preview2-latest in order to make use of the custom database function support, the migration engine will no longer work. I already updated the CLI tools to 2.0.0-preview2-final but it didn't fix the issue....Here's all my Startup.cs and Context code for reference:...Startup.cs:...pu...
asp.net-core asp.net-core-2.0 c# entity-framework-core
asked by ã‚¸ã‚§ãƒŠã¡ã‚ƒã‚“

AddDbContext was called with configuration, but the context type 'MyContext' only declares a parameterless constructor?

I've created an entity that takes a value object as a parameter in it's constructor, however when I add the entity to the db context it throws the following exception....InvalidOperationException: No suitable constructor found for entity type >'BasketItem'. The following constructors had parameters that could not be >bound to properties of the enti...
c# entity-framework-core
asked by JakeAM

I have tried to implement Entity Framework Core to my Application I have some trouble. Following error message occurs when I try to debug:...System.ArgumentException: "AddDbContext was called with configuration, but the context type 'DatenbankKontext' only declares a parameterless constructor. This means that the configuration passed to AddDbCo...
asp.net-core entity-framework-core
asked by OEZ BRO