I recently delete a column ConversationId from my tables. When I start to debug my service and try to save I am getting an error:

All references to ConversationId were removed from the code, I've rebuilt, yet I'm still getting this error and I don't understand why.

This is my SQL Server table as you can see there is no ConversationId: 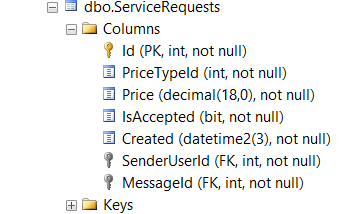 Is there a secret cache that I need to delete or something I have to run to update this?

EF Core is code based ORM, with the most important here being the M - Mapper. It doesn't matter what the actual database structure is, the important is what EF *thinks** it is based on your code model (entity classes and their properties, combined with data annotations, fluent configuration and set of conventions).

So the problem should originate from code. Since you've removed the explicit property, it should be caused by shadow property. And as explained in the documentation link, shadow properties are usually introduced by convention from relationships:

A shadow property called ConversationId can be introduced in a several ways, but according to the provided information, the most likely cause is to have an entity class called Conversation defining one-to-many relationship with ServiceRequest by having a collection type navigation property:

Which according to your comment was indeed the case.

For completeness, here are some other possible scenarios generating such property:

(2) No navigation properties in Conversation and ServiceRequest, fluent configuration:

or variations of the above.

Prepare to call me stupid......Because of how I want to track history on the EmployeeRate object, I was thinking of my relationships between Employee and EmployeeRate incorrectly. Here was my original Employee object (which I should've posted originally):... public class Employee : BaseEntity { public int EmployeeId { get; set; } ...
asp.net-core c# entity-framework entity-framework-core
asked by big_water

How to tell Entity Framework that my ID column is auto-incremented (AspNet Core 2.0 + PostgreSQL)?

You have to use here ..."ValueGenerationOnAdd()".... As the issue you are getting is already reported on GitHub. Please find the below link....https://github.com/npgsql/Npgsql.EntityFrameworkCore.PostgreSQL/issues/73...You can find more info regarding Generated Value pattern from following link....Value generated on add...public classs SampleContex...
asp.net-core auto-increment entity-framework-core npgsql
asked by Trilok Kumar

How to set a property to be "Identity" or auto-incremented column with Entity Framework Core?

This issue could be one of the following two scenarios ...First, you could be unintentionally setting the ...Id... property using auto-mapping tool. If your using auto-mapping utility like ...AutoMapper..., ...ValueInjecter... or ...OoMapper... make sure you configure your mapping to ignore the the ...Id... property when your destination object is ...
c# entity-framework entity-framework-core wpf
asked by Majd Alhayek

A bit late, but we had the same problem in our current project. Above 400 migraitons and 6m lines of code inside .Designer. Here is how we managed to resolve this problem:...MigrationProject.csproj... <PropertyGroup> ... <DefaultItemExcludes Condition="'$(Configuration)' == 'Debug' ">$(DefaultItemExcludes);Migrations\**\*.Designer.cs</De...
.net-core entity-framework entity-framework-core
asked by Jaime Yule

Looks like you are hitting this issue here: ...https://github.com/dotnet/efcore/issues/6147...EF Core generates temporary IDs which are then replaced with the real IDs when SaveChanges is called...It's not exactly a bug and it has been changed again in 3.1....So until the item is inserted, a negative and/or random number makes sense. You need to se...
.net asp.net-core-webapi c# entity-framework entity-framework-core
asked by Athanasios Kataras