I'm working on this tutorial, Getting Started with ASP.NET Core and Entity Framework Core using Visual Studio, and I'd like to deploy it to Azure from a GitHub repository. Using "Web App + SQL" in Azure I can deploy it successfully once, but when I make a change to the database and redeploy I get the error, "Applying existing migrations may resolve this issue..."

So is there some way I can trigger a database update when the app is redeployed with a new migration present?

Just a note, I know there are ways to deploy and manage an app like this directly from Visual Studio, but I'd like to learn how to do it from a repository.

Note: I found this similar question and I tried adding context.Database.Migrate() to the Configure method of Startup.cs underneath DbInitializer.Initialize(context); and this didn't cause a problem when I ran it on my machine but when I deployed it I got "500 Internal Server Error: An error occurred while starting the application."

I tried adding context.Database.Migrate() to the Configure method of Startup.cs underneath DbInitializer.Initialize(context); and this didn't cause a problem when I ran it on my machine but when I deployed it I got "500 Internal Server Error: An error occurred while starting the application."

According to your description, I followed the tutorial as you mentioned to test this issue. I added the DbInitializer.cs in this section and add context.Database.Migrate() under Configure method of Startup.cs as follows:

I added a new property named IdNo for Student class, then started the web application, I could encounter the following error: 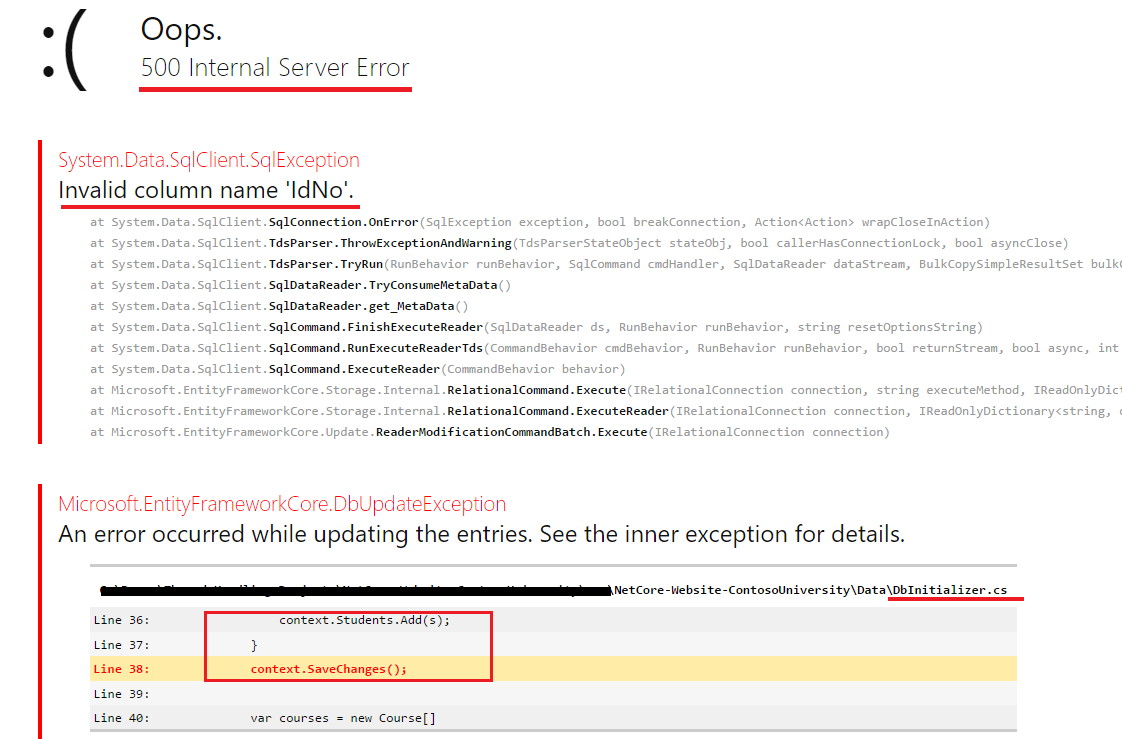 Note: If the Students table has no any records, the DbInitializer.cs would add feed records, then I encounter the above error.

Based on your scenario, you need to leverage migrations feature to update your database schema. As I known, EF Core does not support automaic migrations, you could follow this similar case and this git issue. You could use context.Database.Migrate() instead of context.Database.EnsureCreated() in your DbInitializer.cs and manually add migration file via add-migration, and commit the created migration file to your GitHub repository. 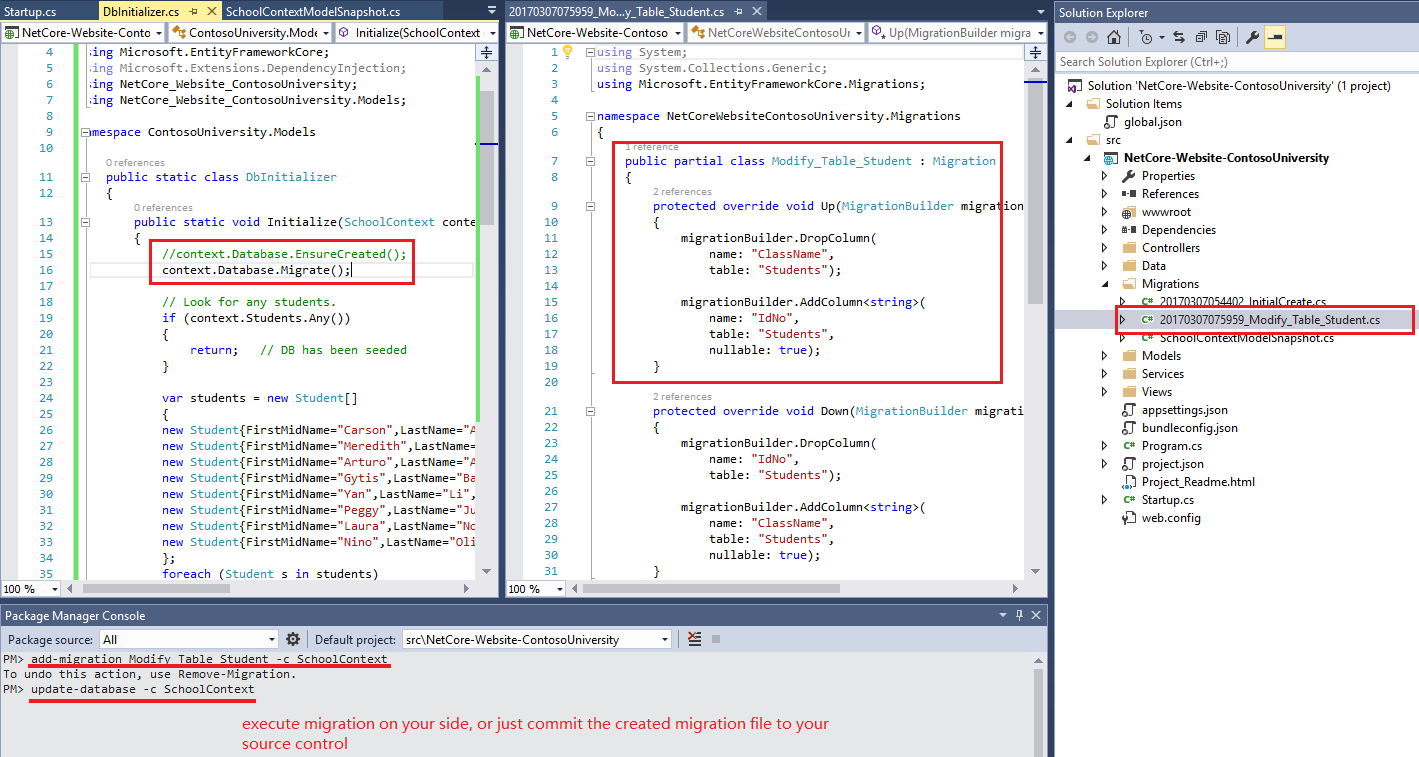 Note: You need to take care of the seed data in DbInitializer.cs, in order to avoid inserting the same record.

I currently have 2 projects in my solution, an ASP.NET Core Web Application and a .NET 4.6.1 (non-core) class library. In my class library, I have added Entity Framework 6 and, using Database First generation, created all my db context classes. Inside the class library, everything is working as expected; however, when I try to access the ef classes...
asp.net-core asp.net-mvc c# entity-framework entity-framework-6
asked by Nick DeMayo

I have been mapping my repository class to its interface and same goes for services. Here I could manually register them. But I would like my code to dynamically map these in run time so that I don't have to manually register them every time I create a new repository or service. How can I achieve that? ...Here's my code:...public void RegisterDepen...
asp.net-core asp.net-core-mvc c# dependency-injection entity-framework-core
asked by Avi-B

I have a Xamarin.Forms project with a user registration page, which sends a serialized Customer object via HttpClient to an ASP.NET Core Web API Controller's [HttpPost] method. The body of this [HttpPost] method is supposed to add a row to a Customers table in an SQL Server database hosted in Azure, via Entity Framework Core....This is the Registra...
asp.net-core azure entity-framework-core sql-server xamarin.forms
asked by LeanManager

I am working on a web api project on ASP.NET Core 2.0 with Entity Framework Core connecting to a postgres database....The following PUT method works without at problem but I feel I might be misunderstanding the use of the update method and I also feel like there should be a more elegant solution to update an existing object in a manner holding with...
asp.net-web-api c# entity-framework-core npgsql rest
asked by Matt Luccas Phaure Jensen

I understand that the serializer in ASP.NET Core may not be able to handle certain responses, but why do I get this error when I don't try to return the object in question?...See the error here: ...https://imgur.com/a/2se9eWB...When I try to affiliated my ...ProjectResourceRequest... with my ...ProjectResourceAssignment..., it writes to the databas...
asp.net-core asp.net-web-api c# entity-framework-core
asked by Tom Crosman

When to use Eager Loading or Explcit Loading in Asp.net Core Web API with EF Core? for example i wrote this query with Eager Loading.is this wrong? is should i Explicit Loading instead of Eager Loading?... var plants = await _context.Plant.Include(plant => plant.Areas) .ThenInclude(areas => areas.Un...
asp.net-core asp.net-core-webapi entity-framework-core
asked by Rohullah Rajaee Rad

I have created a simple ASP.NET Core MVC application using EF Core and SQL Server. On the Windows development machine it is using localdb. I am trying to deploy to Azure App Service (Linux). I have created an Azure SQL database. Deploying from Visual Studio 2019, I have set the database as a dependency. In the publish profile settings I have select...
asp.net-core asp.net-mvc azure-sql-database entity-framework-core
asked by user175562