How do I implement DbContext inheritance for multiple databases in EF7 / .NET Core

I have a number different databases (for different systems) which have common base schemas for configuration items such as Configuration, Users and groups (about 25 tables in all). I am trying to avoid duplicating the quite extensive EF configuration for the shared part of the model by inheriting from a base class as shown in the diagram. 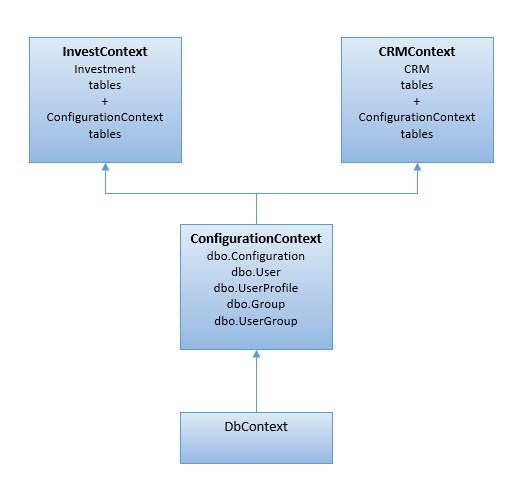 I can't see a way around this.

What is the best way to define the shared model once and use it multiple times? I guess I could create a helper function and call it from every derived context, but it's not nearly as clean or transparent as inheritance.

OK, I have got this working in a way which still uses the inheritance hierarchy, like this (using InvestContext from above as the example):

I have written a method which digs the connectionstring out of a DbContextOptions variable, and builds a DbContextOptions instance of the required type. InvestContext uses this method to convert its options parameter to the right type before calling base().

and the InvestContext constructor call changes from this:

So far both InvestContext and ConfigurationContext work for simple queries, but it seems like a bit of a hack and possibly not something the designers of EF7 had in mind.

I am still concerned that EF is going to get itself in a knot when I try complex queries, updates etc. It appears that this is not a problem, see below)

Edit: I've logged this problem as an issue with the EF7 team here, and a team member has suggested a change to the EF Core core as follows:

This would solve the problem.

After further interaction with that team member (which you can see on the issue) and some digging through the EF Core code, the approach I've outlined above looks safe and the best approach until the suggested change is implemented.

I was able to resolve this without a hack by providing a protected constructor that uses DbContextOptions without any type. Making the second constructor protected ensures that it will not get used by DI.

I might be wrong, but my assumption is that when you create a new instance of ...DbContext... in code, you are using the parameterless constructor that sets underlying connection string to some default value. However, DI-injected ...DbContext... could be resolved using another constructor with different connection string passed in explicitly....Tha...
asp.net asp.net-core dbcontext entity-framework entity-framework-core
asked by Sergey Kolodiy

Database first , How to implement inheritance in EF6

How can I use database Views in a scaffolded DbContext with Entity Framework Core 1.0 (EF7)

For me, my view was in a different schema, so I had to alter an attribute on the model class: ...using System.ComponentModel.DataAnnotations.Schema; namespace API.DataAccess { [Table("MyViewName", Schema = "SomeSchema")] public class MyViewName { //props } } ...For completeness, the entity code: ...protected override void On...
entity-framework-core view
asked by Coruscate5

The concept of having bounded contexts is fine, per se. It's based on the idea that the particular application shouldn't have access to things it doesn't need. Personally, I think it's a tad bit of overkill, but reasonable people can disagree on the issue....However, what you have here, is simply wrong. If your application needs access to all these...
asp.net-core-2.1 dbcontext entity-framework entity-framework-core
asked by Chris Pratt

I met with same the problem and i solved using async-await structure. I have 2 queries and it gives me the error. ...var result = await _context.YourTable.ToListAsync(); ...Maybe this can help you.
asp.net-core-mvc c# entity-framework-core
asked by malik

It is possible to reference EF Core 2.0 from .NET Core 3.1 App?...Yes, totally. Doing the same - and then moving off to Ef 6.4 as it looks as the breaking changes are just not bearable. Spending days trying to get basics working....Isn't there some magic compatibility switch in .NET Core like Microsoft from time to time provides?...No. Breaking ...
.net-core .net-core-3.1 c# entity-framework-core
asked by TomTom

To summarize the response to ...the question you posted... on the firebird-net-provider group, support for scaffolding the model in EntityFrameworkCore is currently not available for Firebird. The improvement ticket for this is ...DNET-798....
.net .net-core c# entity-framework-core firebird
asked by Mark Rotteveel