DbContext.OnConfiguring not getting called and behaving weird in Asp.net core

In my asp.net core project i have a ReadingContext class derived from DbContext. According to documentation OnConfiguring should be called for every instance of DbContext that is created.

But in my case it is only called when i inspect the instance while debugging. I have a breakpoint inside OnConfiguring but it is not hit even when the method is called.

Instance created but OnConfiguring not called yet 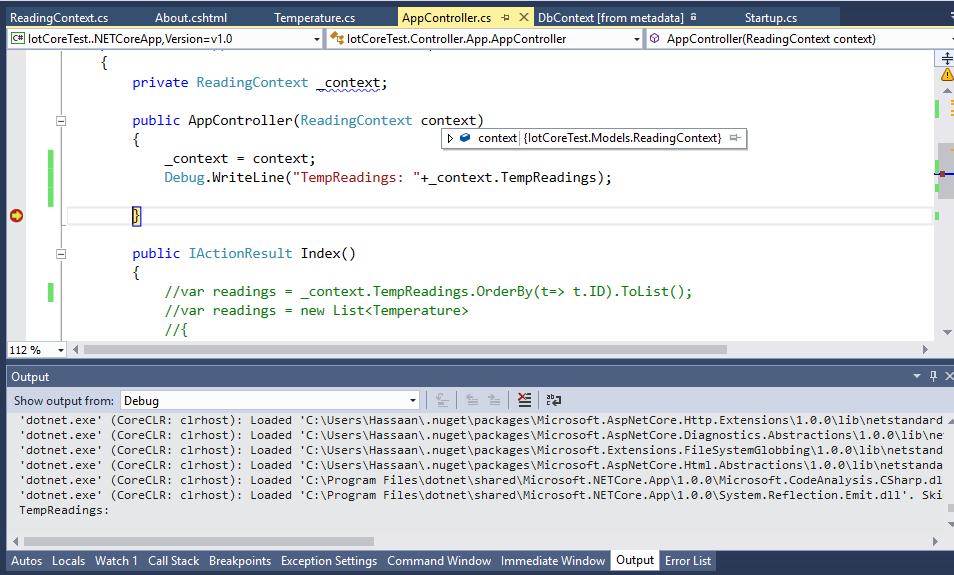 OnConfiguring called on looking into the object but it's breakpoint didn't hit. 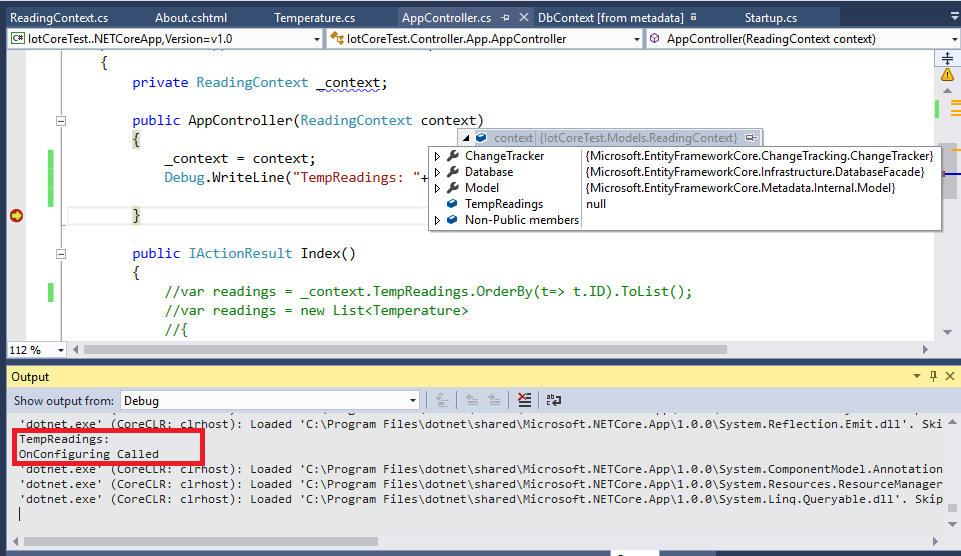 According to documentation OnConfiguring should be called for every instance of DbContext that is created.

I don't know which documentation you refer to, but I'm sure it doesn't say that OnConfiguring runs when the context is created. Because it doesn't. It runs whenever a context instance is actually used for the first time. That's why you see the method call as soon as you start inspecting the context in the debug view. When you pause on a breakpoint in the debugger, the debugger will never jump to another breakpoint, even when the code is hit.

Contexts are supposed to be created and disposed in large numbers. Therefore, creating a context must be as light-weight as possible. Its internal components are created by lazy initialization as much as possible.

Just in case anyone else had this issue, I had to use an empty constructor to get OnConfiguring called:

I might be wrong, but my assumption is that when you create a new instance of ...DbContext... in code, you are using the parameterless constructor that sets underlying connection string to some default value. However, DI-injected ...DbContext... could be resolved using another constructor with different connection string passed in explicitly....Tha...
asp.net asp.net-core dbcontext entity-framework entity-framework-core
asked by Sergey Kolodiy

Check the result of ..._userManager.createAsync.... ...var result = await _userManager.CreateAsync(user, "P@SSWORD"); if (!result.Succeeded) { // something went wrong, inspect the errors } ...You'll most likely find a required property on your ...IdentityUser... is missing or the password is not valid.
asp.net-core entity-framework-core
asked by Brad

How to deal with ASP.NET Core 2.0 Chunked Web Api Call with EF Core

Just as a guess since you haven't posed the error, you're not returning the correct json, paticularly in the case of the 404, I'm not really familiar with the way your doing this, but usually you would just return a list of Persons...I'm not even sure why you would want to 404 just because the department doesn't have personal, instead of just retur...
angular asp.net-core asp.net-core-2.0 asp.net-web-api entity-framework-core
asked by johnny 5

Using Identity DbContext and DbContext in a class library in ASP.NET Core

Combine your two contexts into one. In other words, just make your original context inherit from ...IdentityDbContext..., instead of ...DbContext... and dump the one the Identity scaffold created for you.
asp.net-core asp.net-identity entity-framework-core
asked by Chris Pratt

I'm not sure you do actually need multiple contexts here. You have have noticed that in the EF Core docs, there's this conspicuous warning:...Warning...EF Core does not support multiple parallel operations being run on the same context instance. You should always wait for an operation to complete before beginning the next operation. This is typical...
asp.net-core c# dependency-injection entity-framework-core
asked by Chris Pratt

Virtual property not getting loaded after lazy loading too in ASP.NET Core

When you use lazy loading, it loads the value when you try to access that object. You can use foreach loop for this purpose like shown below : ... var foos = context.Foos.ToList(); foreach (var Foo in foos ) { var result = Foo.Id; //This should load the value now }
.net-core asp.net-core asp.net-core-mvc c# entity-framework-core
asked by Abhishek

So that problem was that I was returning an EntityFramework core class from the controller. The reason this surprised me, is that the object being returned did not have any relationships, but just the mere fact that other objects that mContext interacted with did, caused the entire response to error.
asp.net-core asp.net-web-api c# entity-framework-core
asked by Tom Crosman