Entity Framework 6: is there a way to iterate through a table without holding each row in memory

I would like to be able to iterate through every row in an entity table without holding every row in memory. This is a read only operation and every row can be discarded after being processed.

If there is a way to discard the row after processing that would be fine. I know that this can be achieved using a DataReader (which is outside the scope of EF), but can it be achieved within EF?

Or is there a way to obtain a DataReader from within EF without directly using SQL?

Using EF I can code:

but to achieve the same result with a DataReader I need to code:

The difference is that the former runs out of memory (because it is pulling in the entire table in the client memory) and the later runs to completion (and is much faster) because it only retains a single row in memory at any one time.

But equally importantly the latter example loses the Strong Typing of EF and should the database change, errors can be introduced.

Hence, my question: can we get a similar result with strongly typed rows coming back in EF?

Based on your last comment, I'm still confused. Take a look at both of below code. 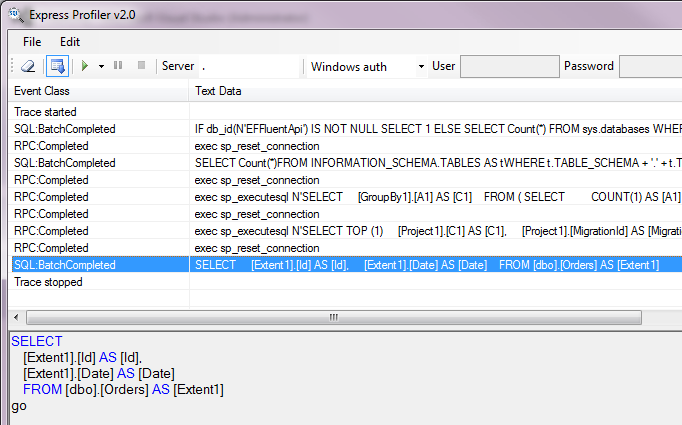 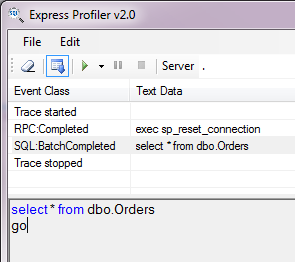 Even though EF has few initial query, both of them execute similar query that can be seen from profiler..

I'm having a hard time finding the exact answer to this question, so my apologies if this is redundant....So I have 3 tables defined such that:...Person :PersonId, FirstName, LastName...Company: CompanyId, CompanyName...Order: OrderId, PersonId, CompanyId...On the Order table, there is a foreign key defined on the PersonId and CompanyId columns, th...
entity-framework entity-framework-6 insert
asked by WerkingWill

I am trying to dump a database table using the Entity Framework in C# using EF Version 6.1.1. I was expecting the foreach loop to load each row one at a time but it gradually loads every row and then runs out of memory....foreach (Quote L in context.Quotes) sw.WriteLine( "INSERT INTO [dbo].[Quote] ([QuoteId], [BookId], [VerbTenseId], [F...
entity-framework entity-framework-6 entity-framework-6.1
asked by Mythlandia

Thanks in advance for your help. ...I'm using my Mac to develop and ASP.NET Core application with SQLite as the database (when learning about SQLite and EF Core, I read through this tutorial: ...https://docs.microsoft.com/en-us/ef/core/get-started/netcore/new-db-sqlite...). Migrations and updating the database schema are working, but it seems as th...
asp.net-core c# entity-framework-core sqlite
asked by Dan

How to read from a table without a primary key in Entity Framework Core 2.0?

I am having a problem reading from a table in my SQL Server without a primary key. I have defined an entity class such as:...public class PerfData { public Int64 ActivityId { get; set; } public Int64 Numbers{ get; set; } } ...And the ...DbContext... class, e.g. ...class MyDBContext { public DbSet<PerfData> {get; set;} } ...The entity t...
entity-framework entity-framework-core primary-key sql-server
asked by Samuel An

Depending on your use-case, you may need to insert them one-by-one and trust on the database unique-index (you have one, right?) to throw it back in your face if it's a duplicate....There is two weaknesses in your code ...besides... memory consumption: concurrency (what if somebody else inserts while you check for duplicates) and the fact that your...
c# entity-framework entity-framework-core
asked by nvoigt

I would like to write Console application in dotnet core 2.1 with EFCore.Postgres 2.1.2....I have two tables in existing Database. Every table has it's own Primary key, but these tables should be related via another field - UserId...My models:...public class UserAddress { public int UserAddressId {get;set;} public int UserId {get;set;} ...
.net .net-core c# entity-framework-core postgresql
asked by Ariel Sz

I am trying to use "table per hierarchy" to model a variety of account types in my database using EF Core (2.1) and I am having a problem where I am getting additional foreign key columns added for the derived types. I have seen ...this... question/answer but I don't think it is the same as my situation....Here are my account classes:...public abst...
c# entity-framework entity-framework-core
asked by Ben

.NET Framework and Entity Framework Core: How can I get hold of the connection string

I've installed EF Core in a .NET Framework 4.7.2 class library. This is just a project containing some specific functionality, not the ...StartUp... project in the solution. The project with EF Core is then referenced by the main project, where the ...web.config... and IoC setup lives. The solution is for a web site....According to ...this page...,...
.net .net-4.7.2 c# entity-framework-core
asked by ptf

I am using EF Core v2.2 for inserting and updating rows into a table....While I am doing that, I am looping based on a list and trying to insert into the table. For the 1st row insert the code works as expected....However from the second item in the list the row doesn't get inserted into the table. ...When I debugged, I found out that after the _rm...
.net asp.net-core-webapi c# entity-framework entity-framework-core
asked by Shekar.gvr